2 cups half and half

Dash or two of tabasco

Place chicken broth in dutch oven or large stock pot. Simmer. Add creamed corn and seasonings. Remove chicken from the bones. Place in chicken broth. Add half and half. Melt butter and dissolve cornstarch in hot butter. Add to chicken broth. Bring broth mixture to a rolling boil and drop in frozen dumplings. (I break the dumplings into 1 inch pieces).

Reduce heat and simmer for approximately 30 minutes or until dumplings are light and fluffy. Taste test and adjust seasonings if needed.

It may seem like a lot of seasonings but the dumplings tend to soak up a lot of the seasoning. I always made my dumplings from scratch until I decided to try the frozen dumplings one day. They were very good and so much easier than rolling out the dumpling dough. 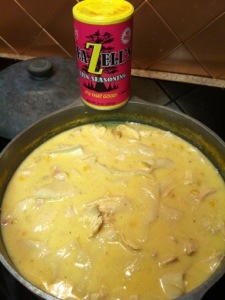