One of my favorite things to give is candy bouquets. With each one I make, the more I learn.

I discovered by accident one day that wire mesh not only dresses up the vase, but helps hide the picks that hold the candy. 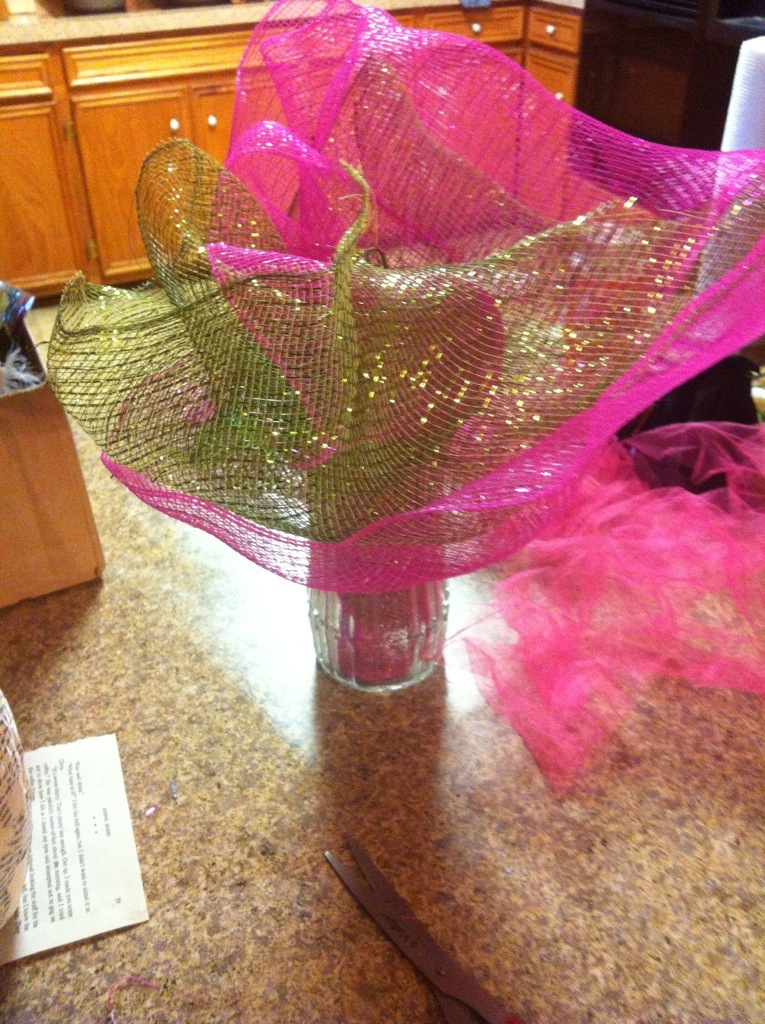 To make the sticks holding the candy sturdier, I use floral tape to combine a floral pick and a wooden skewer. Both are inexpensive and work well together. I use a hot glue gun on low temp to glue the candy to the picks.

On this particular candy bouquet I used tulle and feathers to dress up the bouquet. 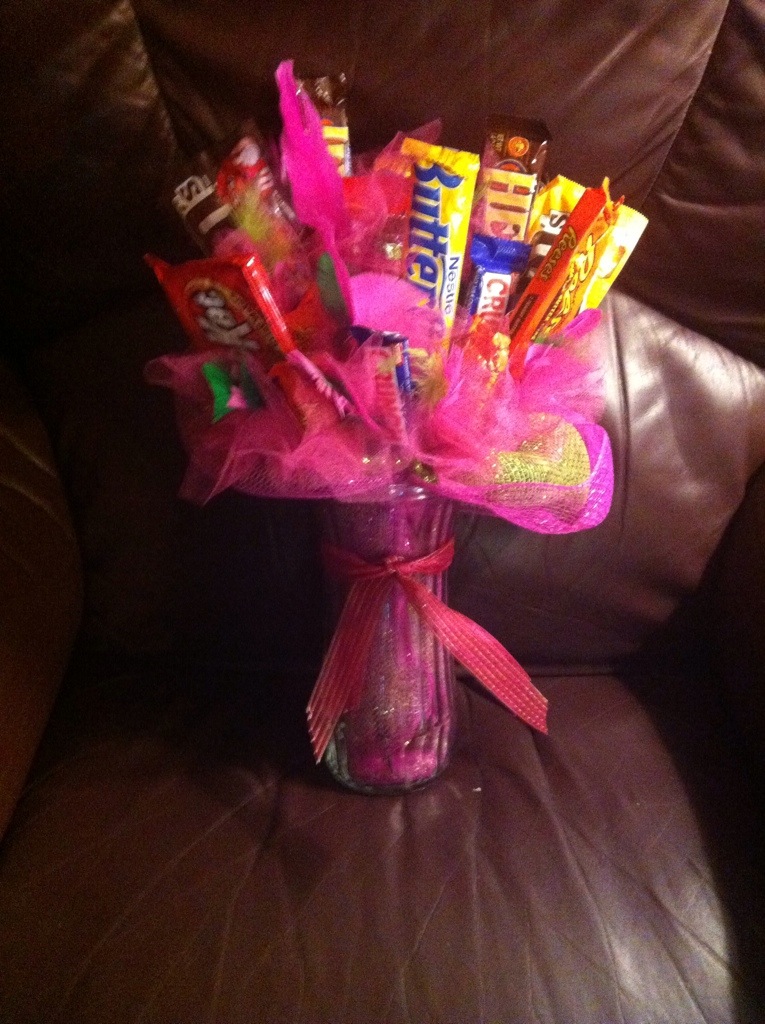 With the holidays fast approaching and my husband still Ill, I am trying to accomplish as many of my projects as I can.

Since I still have a few pages from the book left I decided to try my hand at paper roses to include in the candy bouquet.

After several failed attempts I finally found something that I could do with my hands not wanting to cooperate because of MS.

Next I applied hot glue to the end and rolled the first petal somewhat tight for the center of the bulb.

I continued to apply hot glue to the end of the petals and wrapped around the center of the bulb. 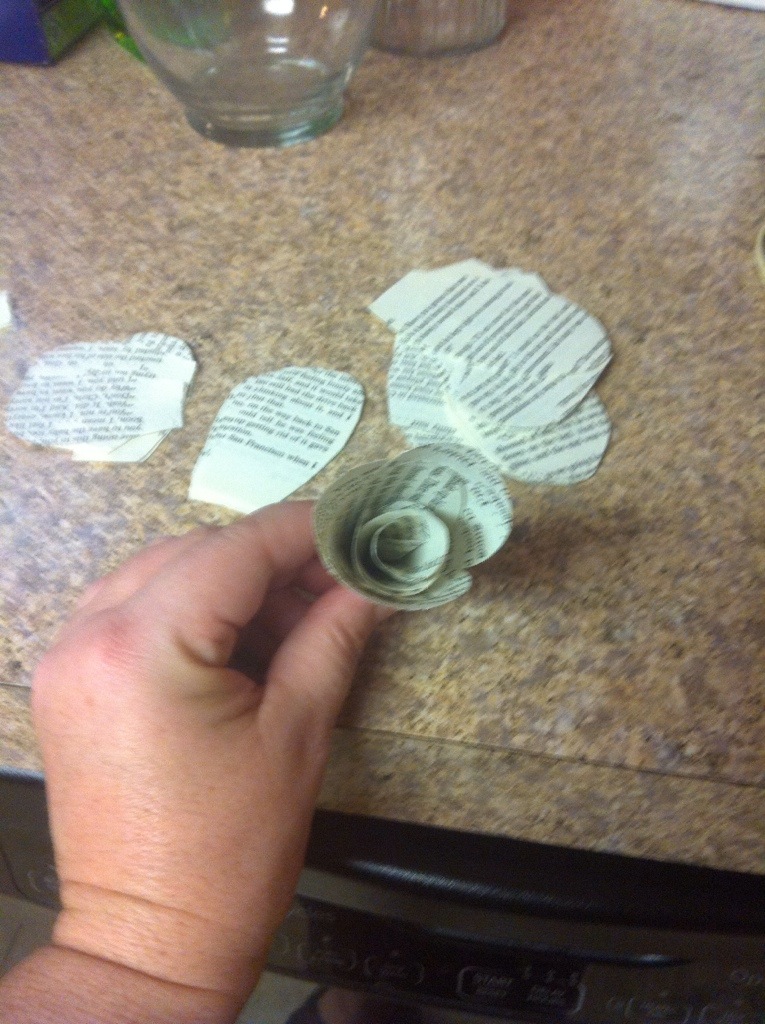 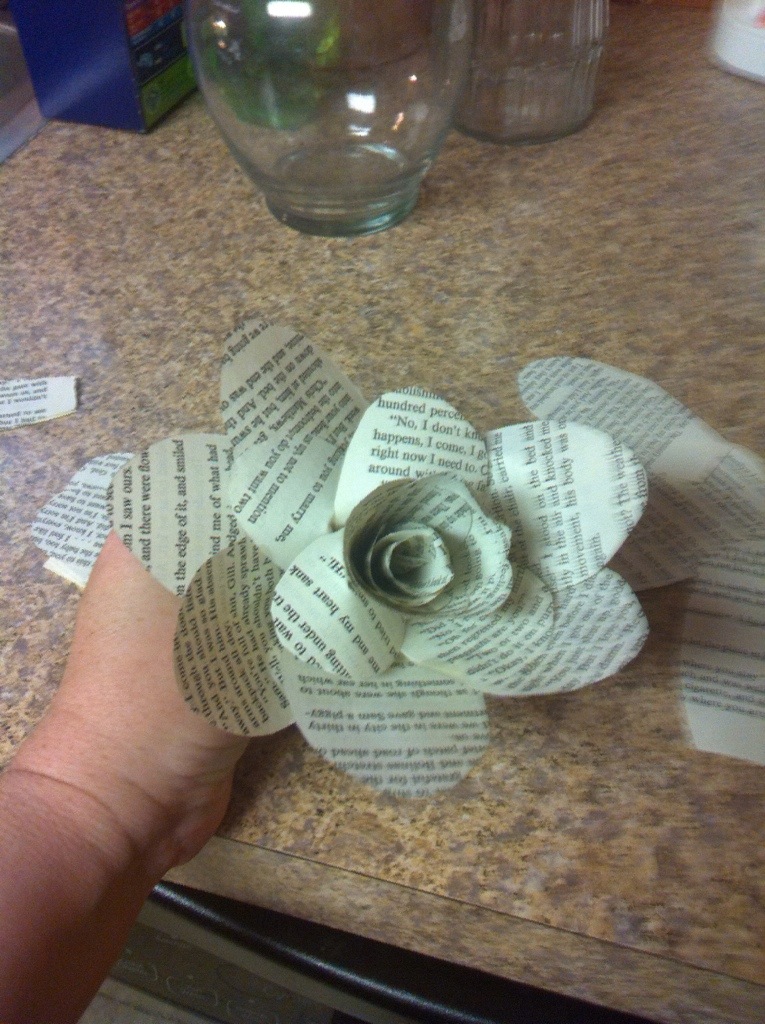 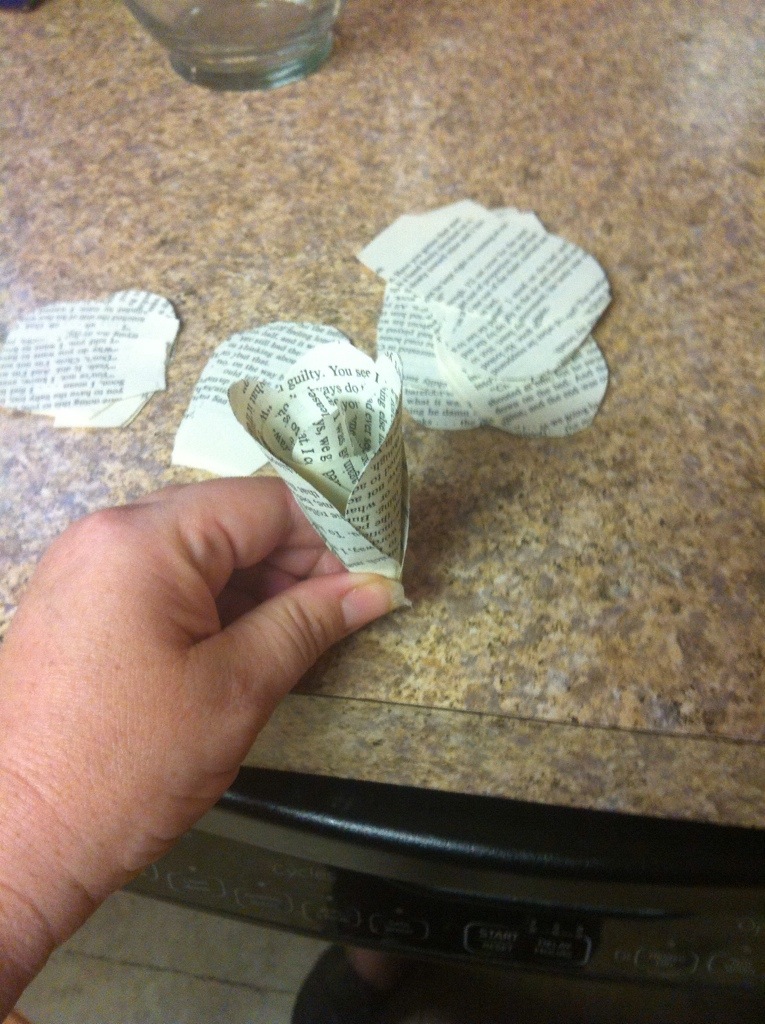 Afterwards I spritzed the flowers with a lightly scented, colored water and glued on a few silk flower leaves that I had here. 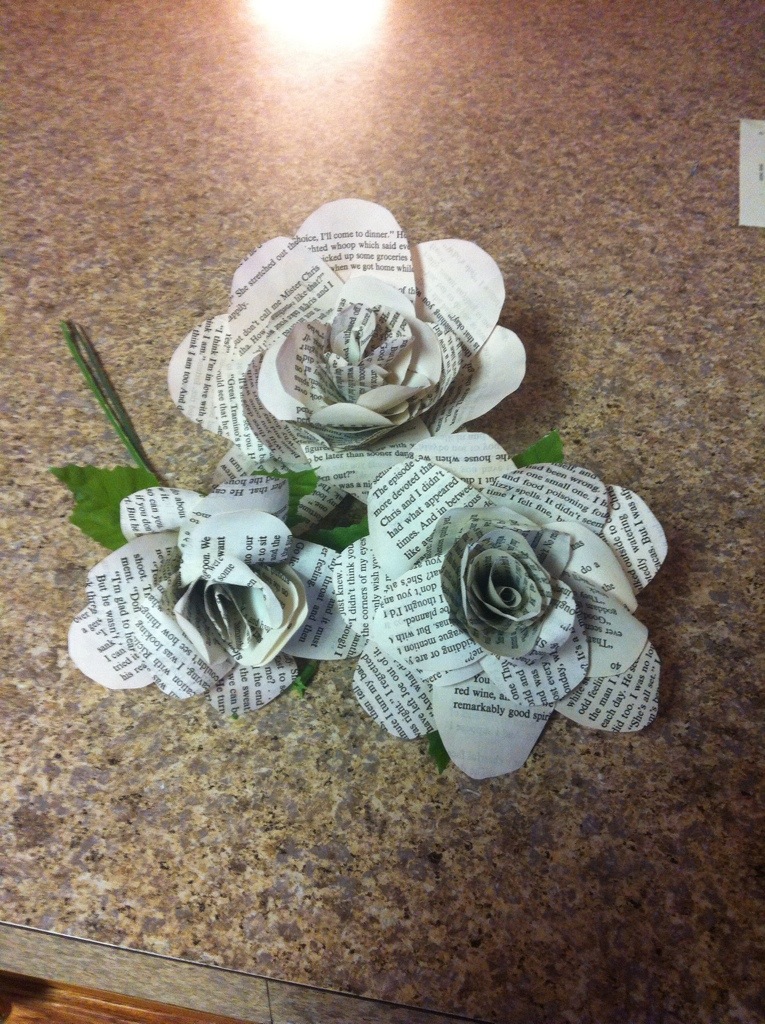 So a friend of mine gave me a bunch of glass vases. My plan is to make candy bouquets for Christmas, but I decided to give them a facelift.

This is the before picture. 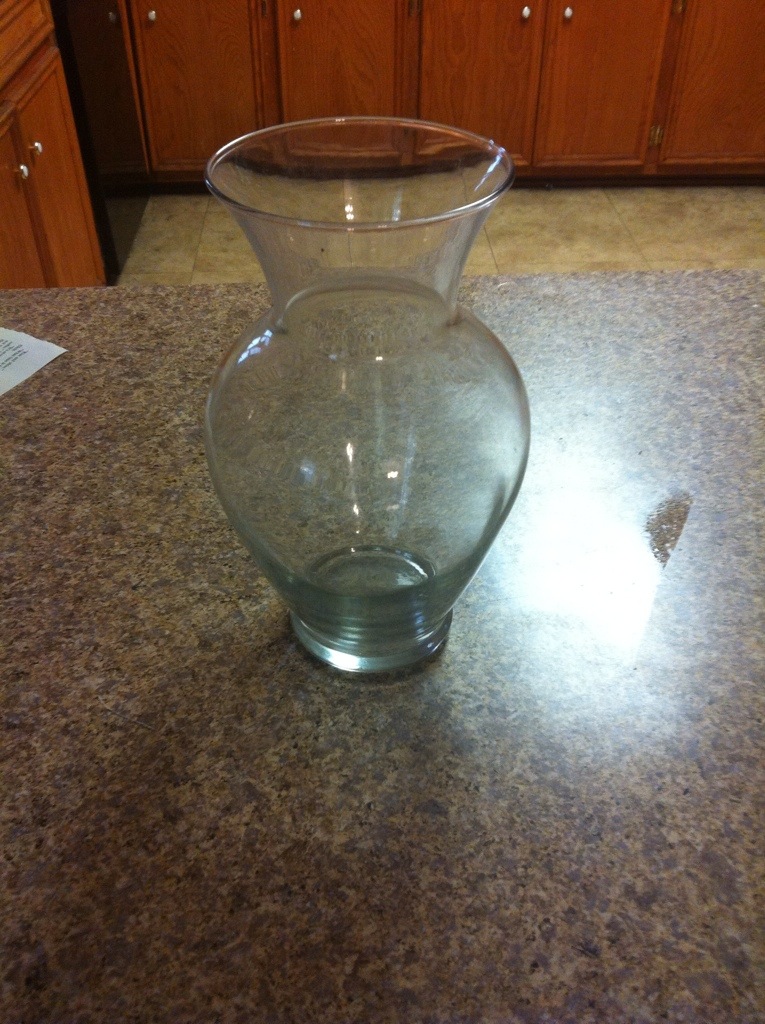 And since I had the interior of the hardback book left from the leather journal I made I decided to modge Podge it over the vase.

However to hide any mistakes I may make I painted the inside gold. Instead of hand painting the whole inside though I poured the paint in the glass vase and kept twirling this way and that way until it was fully covered.

While the interior dried I cut several pages into various sized strips and began gluing the pages onto the vase.

This is the end result –

Yesterday I decided to venture into making liquid soap from semi-scratch. Resa had a few bars of soap that she loves however we could never find it in liquid form since it came from a recent hotel stay.

My mom told me how she melted down soap so I decided to give it a try. We may never have to buy liquid soap again.

I bought a gallon of purified water to use. Next I grated the bars of soap. She had enough where I ended up with 2 cups (we do tend to stay a lot at La Quinta).

Now since the stove and I are not the best of friends I used the microwave. Heat to boiling. Once hot add the grated soap and whisk until melted.

Next comes the hard part – you have to wait. The one mistake I made yesterday is that while still warm I poured into a gallon container. Unfortunately I should have listened to Mom and used more water. I just thought 6 to 8 cups of water was way too much.

This morning the soap is extremely thick so now I have to decide if I want to try and thin it out now or just leave it.

For families wanting to be frugal (or have a daughter like mine who loves using tons of soap) this is a very economical way to make liquid soap.

Even if you have to purchase a bar of soap the cost would be minimal – around $2 or so. The glycerin was inexpensive as well at Hobby Lobby. The bottle was right around $3 but from that one bottle you can get at least 10 gallons from it, if not more. The gallon of water was $1 but I also ended up with a jug to store the unused soap in – another plus.

Next Resa wants me to try making her bath bombs. My first attempt did not go so well. They were more like flat discs than round balls. But boy did they fizz. Maybe today’s attempt will go a little better

Resa and I have been super bust this weekend.

Today’s project was voodoo doll keychains. They came out way too cute, in a creepy kin

The voodoo dolls are available for purchase at