This past weekend I had the wonderful opportunity to attend the Fall Festival at Good Books In The Woods in Spring, Texas for a book signing. I cannot thank them enough for the invitation.

As soon as I walked in the door I completely felt at home. As much as I love my eReader there is nothing that can replace the feeling of walking into a book store.

I have in turn passed that love on to my daughter who spent several hours searching through all the books available for purchase at this store.

I highly recommend anyone in the area stopping by for a cup of coffee and of course to purchase a book or two.

From the helpful and friendly staff to the vast selection of books you won’t regret stopping by.

I for one can’t wait for another chance to visit this delightful store.

There is one four letter word that sends shivers down my spine – iron.

The iron is definitely not my best friend and what is worse just about every shirt my husband owns needs to be ironed. The most dreaded of all is his beloved “fishing shirt”

That is until a friend of mine told me about “Downy Wrinkle Release”. I was in heaven. For once a product actually worked like it is supposed to.

Unfortunately 1 bottle never seemed to go very far. Tonight I was too lazy to run to the store and purchase another bottle and definitely didn’t want to bring out the feared iron.

After a search on google I found several recipes. Of course I had to tweak the recipe to my own desires.

This recipe is something most everyone will have in their home too. Plus the cost is actually very minimum, especially if you have everything already.

Pour ingredients into a spray bottle. Shake. Ready to use.

With this recipe I barely had to pull in the clothes. It was removing the wrinkles as I sprayed the mixture on. Plus it smelled really good.

Mix all of the above in a 9×13 dish. Bake at 350 degrees for approximately 30 minutes. (Until a knife comes out clean)

Note: dish can be prepared the night before and refrigerated. Bake the following morning.

Even though the weather has yet to cool down I couldn’t wait to eat a big bowl of gumbo. Unfortunately my hubby was at work today so I decided to attempt cooking a gumbo.

Although I could have cooked a roux from scratch I cheated. I must say the result was really tasty.

First I cooked down completely 1 small bag of frozen okra.

Next I added 1/2 a bag of seasoning blend (onions, bell pepper and celery from freezer section). I cooked that down for another 15 minutes.

Once the above was cooked down I added 3 pounds of boneless skinless chicken thighs and 2 pounds sliced smoked sausage. Season well with Beazell’s and Dat sauce. Cook down for another 40 minutes.

If you have any oyster juice available you can add that at this step also. (I like to keep oyster juice in the freezer when I can. Unfortunately I didn’t have any handy today. The gumbo was still good though).

We like our gumbo thick but you can add more water to thin out. Season to taste. 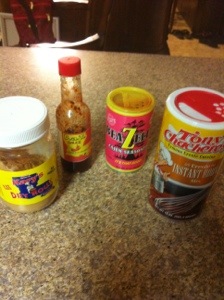 Wrap 1/2 slice of bacon around cubed chicken. Bake at 375 for approximately 15-20 minutes – until chicken is done.

In a skillet heat Canadian Bacon (or ham) just until warm. Place over toasted English Muffin.

Next top with warm Hollandaise Sauce. (Recipe is available on blog)

If you are like me and dread making Hollandaise Sauce don’t fret. With this easy recipe you will make it way more often.

If your Hollandaise Sauce is too thick add a little bit of HOT water until you have reached desired consistency.

So last night on the way home my family mentioned several times that it has been a very long time since I made “Eggs Benedict”.

Just thinking about poaching an egg sends shivers down my spine. That is the one thing I can never seem to get right.

Putting my fears aside I went to the grocery store while they were still sleeping this morning for all the ingredients to make Eggs Benedict, making sure to pick up an extra dozen eggs just in case.

After the 3rd failed attempt at the stove I scrapped everything I read on the Internet and decided to try something else.

I put a smaller pot of water on to boil and waited until the water was at a rolling boil. Once the water was really boiling I added 1 teaspoon of “Dat Sauce” Hot Sauce.

Woohoo, I actually had a perfectly formed poached egg in no time.

What was even better is since I added the “Dat Sauce” in the water the egg was also perfectly seasoned.

It looks like my family may actually get Eggs Benedict a little more often now. 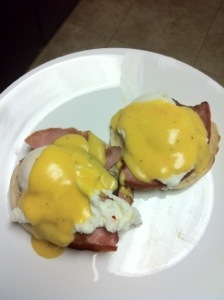