I would like to personally thank Lafayette Music for taking the time to really work with Resa yesterday.

She was having a hard time with her flute and was ready to trade it in on a trumpet. They actually took the time to work with her and show her how to play the flute.

The staff there is extremely nice and very helpful. In no time they had her playing it. She has actually been practicing it now with no reluctance.

She had her heart set on the flute when she joined band and then 3 weeks later she was ready to give up. Now she is back to liking the flute and you can hear her hit those notes. 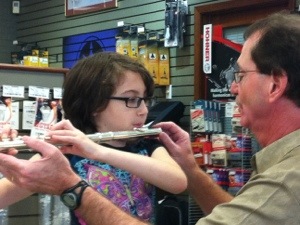 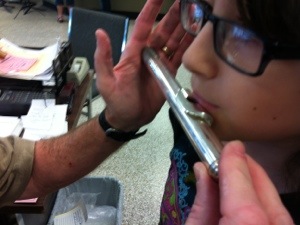 So I made another one of their favorite dishes allergy free. I made mock “Alfredo” sauce.

Melted a tablespoon of butter and added a teaspoon of cornstarch to make a roux. Whisked in 2% milk (2 cups) and seasoned with Beazell’s Seasoning and garlic. Reduced until nice and creamy.

Served with a pan seared steak.

With each passing day I am learning more and more about computers and all the wonderful things you can do.

Not only am I learning how to make your own movies from the windows movie maker, but I was able to get into my website and update that as well as my blog.

This time last year I could barely post something on facebook. My two kids have been showing me a lot of what to do and I truly appreciate it.

Still working on my google plus and pinterest so please be patient. Right now I’m just thrilled that my website is up and going.

Trying a new place for breakfast.

Jessica Stanford is a precocious 6 year old and the light of her parents’ eyes.

While jumping on her trampoline she falls and shatters her ankle.

She is rushed to St. Anne’s Hospital.

Dr. Habersham has a fascination with the human body and all of its intricacies.

When little Jessica is wheeled into his operating room he sees the perfect opportunity for another one of his experiments.

What would happen if he removes part of her ankle bone?

Dr. Frankenstein is available in eBook for Kindle, Nook, Apple iBook and smashwords.

Paperback is available at Amazon.com and BarnesandNoble.com

One of these days I am going to take some time and catch up on all of my reading. I have been finding several books to read and even downloaded the samples but have yet to actually read a book.

Just when I think I have some spare time another idea comes to mind.

A Spellbinding Thriller Mary R. Theriot’s “The Hideaway” Will Give Readers Chills

In her spectacular eBook debut, author Mary Reason Theriot gives readers a suspenseful thrill ride through the bayous of Louisiana. In the small town of Hope, young woman have gone missing. When their bodies begin to be found, the residents of this idyllic town are shocked to realize that evil has been living among them, disguised and waiting. http://maryreasontheriot.com/

Detective Jordan Sanders has been assigned to the case, and she is determined to catch the murderer before he can kill again. Certain that putting him behind bars will be the jumpstart her career needs to get her appointed as Sheriff, Detective Sanders is not letting anything get in the way of her investigation.

When the small police force hits a dead end in their search, however, the FBI is called in to assist them. Agent Alex Hamilton travels to Hope expecting to catch a killer, but finds himself unexpectedly blindsided by his feelings for Detective Sanders. What began as a one night stand is turning out to be more, but not if the killer has anything to say about it.

The elusive killer knows that Detective Sanders is after him. His rage at a crescendo, he begins to hunt Jordan as she is hunting him. All he has to do is wait for the perfect opportunity, because Detective Sanders is far more vulnerable than she realizes. Will Agent Hamilton be able to stop him before he can get to Jordan?
Readers will be on the edge of their seat while they tear through the pages of The Hideaway to reach its gripping conclusion. Now available in eBook format, Mary R. Theriot’s debut novel is sure to be a hit with lovers of the romance thriller.

Louisiana-native, Mary Reason Theriot has lived in various states with her husband’s United States Coast Guard career. Until being diagnosed with Multiple Sclerosis in 2001, she worked in the legal field. Encouraged to write by her youngest child, she calls writing “great therapy for my own personal fight against MS.” The Hideway is her debut novel.

Available as eBook on Nook, Kindle and Apple iBook

I have so many ideas floating around in my head. If only I could just snap my fingers and voila they are written.

Detective Jordan Sanders is the only female on the force in Hope, LA. She is a brown haired, blue eyed bombshell who can out shoot most of the men on the force.

When mutilated bodies are left around town she is determined to find the killer.

The FBI Profiler Alex Hamilton is called in to help profile the elusive killer.

When Agent Hamilton and Detective Sanders meet sparks fly. There is no denying a sexual tension between the two.

Detective Jordan Sanders can be found in The Hideaway as well as The Traveler.

Both books are available as eBooks on Kindle, Nook, and Apple iBooks.

Also available in paperback at amazon.com

I put a smile on my daughter’s face this morning. I woke up early and fixed her pancakes for breakfast.

I was even nice and made breakfast for the whole family as well as lattes.

Now to fix lunches, prepare supper and get ready for the busy day.

Hope everyone has a great day.